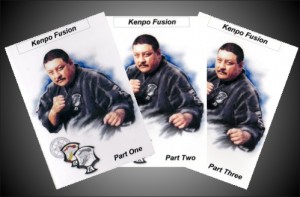 These DVD’s are based on the boundaries of Boxing, Kick Boxing, Karate, Judo, and Ground Fighting combined. This 3 disc series was recorded live during a 3-day seminar that GM Frank Trejo held at Steve Stewart’s Modern Martial Arts in London, Ontario, Canada in December of 2002. Purchase this set for $49.95! If you order now, you get the Live Action IMMAF 2012 DVD for half Price!

Also available is this Live Action DVD from the 2012 IMMAF Conference for just $25.00.

Proud members of the International Brotherhood of American Kenpo Karate